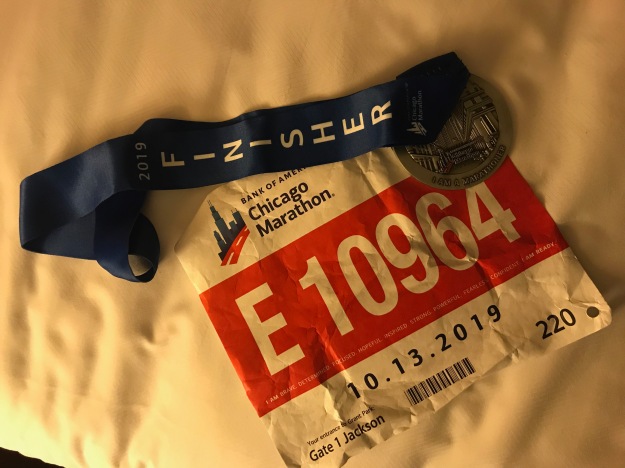 Somewhere between mile 19 and mile 20, a runner just in front of me took a few steps to the side of the road, stopped to walk and muttered, “fudge,” only he didn’t say fudge.

My thought as I ran past was, “I feel ya brother.”

About 15 minutes later, I took a few steps to the side of the road, stopped to walk and muttered, “fudge,” only I didn’t say fudge.

For 21 miles of the Chicago Marathon, I was on pace to shatter my PR and finally, FINALLY, break that elusive 3:47 goal I have been chasing for the last 6 years. The race really started to hurt a long time before that, but it wasn’t until I finished mile 21 that I really started to feel all the aches and pains in my old body and started to crash and burn.

My fifth attempt at the marathon taught me a lot, but more than anything it taught me what I had already learned in my previous four marathons: These things are hard. For a broken old fart like me, they are really hard.

But more importantly, I learned that there is still a little bit of fight in this old broken down body of mine, I just wish I had figured that out a few miles earlier.

I had a handful of goals for the Chicago Marathon, the most important race of the year for me. 3:47 was at the top of that list. Setting a personal best was next, followed by feeling good about myself. Lastly, I didn’t want to finish the race saying, “I never want to run a marathon again.”

I definitely accomplished one of those goals and definitely didn’t accomplish another. The other two, well, the jury is still out. 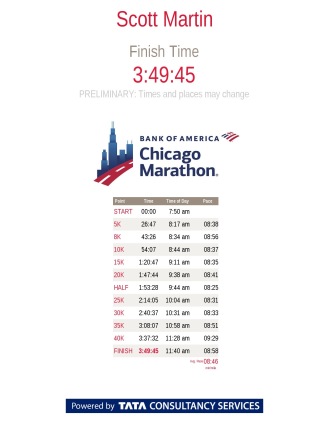 There was a lot of time Sunday where I felt pretty good about myself, and a there was some time when I felt disappointed in myself. So that one is a mixed bag.

As far as wanting to run another marathon … well, that is very much up in the air at this point.

I ran the first mile or so of the race with the pace group, trying to settle into whatever pace the two pace-setters were setting. I also had to pee because the lines for the porta-pottys before the race were absurd and I didn’t feel like finding a bush and relieving myself in front of 45,000 other people (no one else seemed to concerned about that, though … people were peeing everywhere), so I at some point early I wanted to leave the group and get a bit of a lead on them, so when I found a porta-potty, I wouldn’t fall too far behind.

I found the bathroom just after the 5K mark and took my chance. When I got back on course, I caught right up to the pace group and tacked onto the back. The group, however, was all jammed together and there was no room to run, so after half a mile or so I pulled out around the group and went on my own.

It was soon after leaving the group that I made a choice. My GPS was pretty useless, so I didn’t know at any given time what pace I was running. I manually kept my laps, so I knew what I was running in mile in. I was mostly between 8:35 and 8:40 pace so I decided to keep running how I felt and go for it. I made a choice that this was a day to go push it and actually see what I was capable of. I didn’t know if that would blow up in my face, but I was determined to give it a try.

And regardless of what happened, regardless of the fact that the last 10K of the race was a pretty terrific struggle, I do not regret that decision. Not one bit. Yes, I told myself before the race I would be OK if I didn’t leave it all out there and ended the race feeling like I had run a good race but wasn’t totally destroyed. Once I got into the race though, I decided that wasn’t good enough. I wanted to race. I wanted to push myself. I wanted go for it.

That was a great decision until about mile 22. I clicked off a bunch of 8:30 miles-8:40 miles until mile 10, when I made a second bathroom break. I quickly got back on track and threw in some really good splits.

These are not the right miles because I missed one of my splits. This is actually mile 11 to mile 21.

I was on a roll despite a left hamstring that hasn’t felt quite right in the last two weeks and started barking around mile 5, and my arthritic right knee, which started to hurt at the half.

But when I crossed the mile 21 point, it all started to catch up to me. My knee was really bothering me and my legs were starting to get heavy. I slowed to 9:02 in mile 22.

I don’t regret much of what I did on Sunday, but looking back, there are two things – or two miles – I do regret. I let the pain and suffering get into my head in mile 23 and I stepped off the side of the course to walk for a little bit. I was hurt. I was suffering. I felt defeated. I was ready to quit.

I sulked my way through a 9:54 mile and forgot all about that 3:47 goals, I was nervous I wasn’t going to finish. I was having flashbacks of that awful final 10K at Sugarloaf and convinced I would never run another marathon.

But then I got a little pissed off and challenged myself. I was upset that I had pretty much cost myself that 3:47 by quitting on myself — TWICE — but after a little math I realized that I still had a chance to PR. I had 1.2 miles to go, if I couldn’t run 1.2 miles, well, what I was doing out here anyway?

I ran through the wall of sound created by the crowds lining both sides of the street, fighting the urge to walk because I knew if I walked, my PR was still going to be that 3:50:12 I ran at the Maine Marathon. At this point, that was unacceptable.

I made the turn into Grant Park and up one of the few hills on the course, and just before turning to run the final 200 meters of the course, looked to my right and saw the 3:50 pace leaders. Sweet, I thought, I’m definitely going to break 3:50. Then I heard the 3:50 pacers shouting at their group and was glad I made the decision a long time ago to leave them. I’m not sure I could have taken 3 hours and 50 minutes of pace leaders yelling at me.

So I took off, wanting to get away from the yellers and wanting to finish as far until 3:50 as I could at that point. I pounded my fist into my chest a couple of times and let out a yell as I crossed the finish line, much different than the curse words I spewed at the 2014 Chicago Marathon.

I was glad to be done. I was glad to PR. I was glad to be able to push myself through this after the shitshow at Sugarloaf and after the two months I was unable to run shortly after that. I was also grateful that the strained hip flexor that put me on the shelf for two weeks this summer didn’t completely derail me.

Chicago was a win. I wanted a little more, but I cannot be upset with a marathon finish and a marathon PR. It was two years ago, almost to the day, that I had to skip my leg of the MDI Marathon relay because of my cranky old knees. I didn’t know when I’d be able to run again, much less if I’d ever be able to run another marathon.

So yeah, Sunday was a big win.