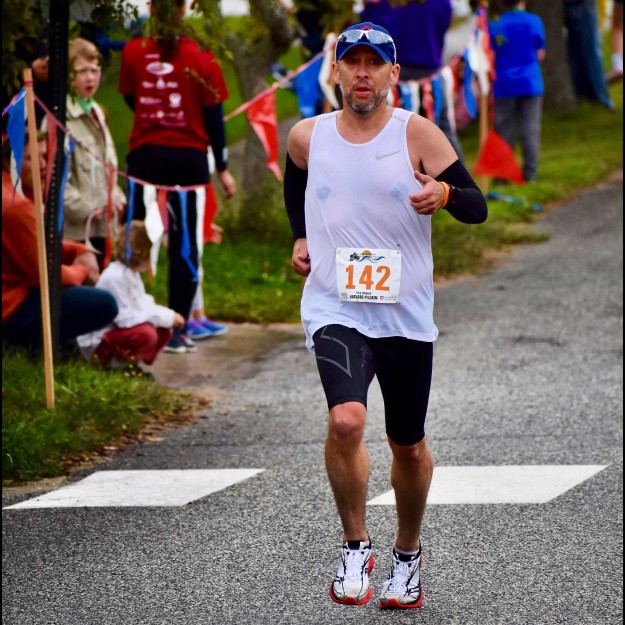 Closing in on the finish line, pushing the pace much harder than I expected to. (Photo by Maine Running Photos)

Shortly after the 10-mile mark, I passed the last runner I could see in front of me. I occasionally heard footsteps behind me, but I slowly pulled away and had the road to myself. In races, especially when I’m running kind of hard, I don’t really like being all alone. I like have runners around, runners to chase, runners to pace myself with.

But with about 2.5 miles left in the Lake Auburn Half Marathon, I was all alone and fighting the urge to slow down a little bit. I was already running much faster than I planned, and it was getting harder to keep up that pace while running with no one in front of me and no one behind me.

Then, with just over a mile left, as I turn out of the parking lot at St. Mary’s Hospital, I saw a runner up ahead. A yellow hat, making its way down the side of the road, toward the entrance to Central Maine Community College and the finish line. At that point, I made it my goal to get as close to yellow hat as I could, if not catch him (I knew it was a him because I saw that hat when he ran by after he had, and before I, made the turn around at mile 7).

Very surprising splits considering my plan before the race.

And that is how, at the end of a half marathon in which I was never planning to run faster than 8 minute per mile pace, I dropped a 7:22 mile. The closer I got to yellow hat, the harder I pushed. I knew I had a chance to catch and pass him as we entered the school and a continually reeled him in until passing him about 50 meters before the finish line.

Passing yellow hat guy didn’t mean anything in the grand scheme of things. We were not in the same age group, though that thought did cross my mind a few times as I tried to reel him in, and I wasn’t going to place in my age group anyway (I finished 41st overall and 10th in the 40-49 age group). No, passing yellow hat guy wasn’t about a race result or about pride, it was simple a way to push myself to see what I had in the tank and what I was capable of. It was about finding some form of motivation at the end of a pretty dang hard effort. It was about having some fun in the spirit of competition.

Sunday was kind of a big day for me for a number of running-related reasons.

Pre-race, fighting some race-day anxiety while listening to loud music and taking selfies in my car.

First and foremost, I put myself in a race environment, which I haven’t done nearly enough this year. When I ran Chicago in 2014, I was so nervous before I race I nearly puked in a trash can after taking a sip of Gatorade before the race. This year, I had only raced three times before Sunday. One of those, the New York City Half Marathon, is similar to what I’ll experience in Chicago, the rest were big my Maine standards, but small in the grand scheme of things. But anytime I can pin on a bib, stand on a starting line with a crowd of other runners, with some sort of goal in mind, I fight race day anxiety. To face that anxiety one more time before Chicago hopefully will serve as a reminder on Oct. 13 that I can handle those race day nerves and run a solid race.

Second, I pushed myself well beyond what I thought I was capable of. My game plan for Sunday was to run the first few miles as a warmup, then get 75 minutes or so at steady state pace, which I thought was 8:00-8:15 per mile. I never considered the possibility that I could drop 7 sub 8 minute miles on my way to the third fastest half marathon (1:44:59) that I have ever run. My plan was out the window when I ran 8:20, 8:27 and 8:21 in the first 3 miles, then I forgot all about it when I reached the top of a long, long hill at the end of mile 6, ran around a traffic cone and ran down that long, long hill. I felt like I was shoved in the back, I picked up so much speed around that corner, and decided to just hammer it for as long as I could after that. I held together so much better than I expected and gained a ton of confidence in my fitness.

Lastly, I was able to practice for Chicago. I wore the shoes, shorts, singlet and baseball hat I plan to wear for the marathon, and I followed the nutrition plan I am thinking I will use. Everything felt good, everything worked well, so I don’t have to worry about that any more. (I do have to question the use of styrofoam cups at the aid stations).

I’m happy with how things went. I’m glad I put myself out there and pushed myself to an uncomfortable spot to find out just where I am. I’m glad it was a confidence building experience. I’m glad I made it out of the race healthy and ready to step back into training for the big one in five weeks.

3 thoughts on “Lake Auburn Half Marathon 1.0”